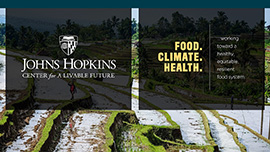 It is disappointing to see members of the media spread misinformation due to their own ignorance, gullibility, or, worse, disinterest in digging for the truth — especially when it has to do with the health of children. Case in point, a reporter from a South Dakota talk radio show apparently believes that Baltimore City Public Schools’ Meatless Monday meals are lacking in protein. Last Friday, Tom Riter asked U.S. Agriculture Secretary Tom Vilsack a rather leading question (notice how many times he said “bother”) during a USDA news conference to preview the Obama administration’s priorities for the Child Nutrition Act Reauthorization:

Seriously? He thinks Baltimore City Schools are denying kids their recommended daily allowance of protein? I hate to break it to you Mr. Riter, but meat isn’t the only food that contains protein. The United States is among the very few wealthy nations in the world where people derive the majority of their dietary protein from animal sources. The global average is 30% of dietary protein from animal sources, including dairy and eggs, and 70% from grains, vegetables, and fruit.

If Mr. Riter had bothered to contact the Baltimore City Schools he would have found that each meat-free meal contains more than the amount of protein required by the USDA. My guess is that Mr. Riter jumped to his mistaken conclusion after reading misleading quotes from a meat lobby organization, or he really needs to brush up on his basic biochemistry.

Not being a biochemist myself, I wanted to confirm with an expert that eating a meat-free diet one day a week in no way denies a child of a well-balanced nutritious meal. So I emailed Dr. Marion Nestle, a nationally renowned food expert and professor of nutrition, food studies and public health at New York University. Dr. Nestle responded:

But what about the claims that we need to eat animal proteins because they contain certain “necessary” amino acids that vegetable proteins don’t? Professor Nestle replied:

However, Dr. Nestle did say:

“Meat makes a huge difference in the diets of deprived kids in developing countries not only because of its protein, but also because its nutrients are sometimes more absorbable than those from vegetables. For American kids, who eat plenty of calories, it’s far less important.”

By the way, if Mr. Riter had actually tried to find out what the kids were being served, he would have found animal proteins are still on the menu. Below is a sample of the meals Baltimore kids are eating on Mondays. You might notice that the meals contain dairy products.

Regarding Mr. Riter’s leading question, Secretary Vilsack didn’t bite. Instead he made it clear that all of our schools are feeding students foods that are packed with too much saturated fats and salt:

“It’s fairly clear from the [recently released] Institute of Medicine study and other additional studies that we’ve got far too much sodium, far too much saturated fat in the diets of children, and far too many discretionary calories. The result is that youngsters are not getting the nutrition they need and we need to do a better job.”

I’d be remiss if I didn’t point out that Feedstuffs, a popular agribusiness newspaper, recently took the time to get most of the story straight regarding the Meatless Monday program at Baltimore City Public Schools. Here’s an excerpt for an article published today:

“Interestingly… Anthony Geraci, director of food and nutrition services for BCPS, doesn’t see Meatless Monday as having anything to do with denying kids meat. In his opinion, Meatless Monday is simply a marketing ploy he has adopted to expose kids to more plant-based proteins.”

Feedstuffs’ Trent Loos, a rancher and radio show host, traveled to Baltimore and posted a video of his interview with Geraci. Geraci is a very persuasive person. He obviously won Loos over with his ambitious plan to change the way Baltimore students think about food.

Like Tony Geraci often says, we can’t lose sight of the fact that the campaign to improve the foods served in public schools isn’t about politics or corporate profits, it’s about the health and well-being of children.