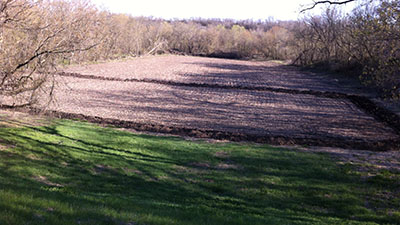 Okay. I admit it. Sometimes I can be a little overzealous about things. Take cover cropping, for instance. Before I moved to Minnesota, my family gardened a 10 ft. by 15 ft. plot through the Baltimore City Department of Recreation and Parks’ City Farms program. And while 150 square feet can produce quite a bit of food, it’s still a really small space. You can walk from one end of your garden plot to the other by taking approximately five long strides. So, when cold weather approaches and people put their gardens to bed for the winter, they tend to just leave them bare, let the stuff that was growing in them hang out until spring, or throw down a bunch of compost or straw to protect and enrich the soil. To do much else – like seed a cover crop – is a little, well, over-the-top.

Nonetheless, I wanted to do it. I had read about the benefits of the practice, and it seemed like a good thing to try out. So, I went to Meyer Seed Company and asked for (I’m not kidding) four ounces of barley and one ounce of crimson clover, roughly the amounts recommended in my Master Gardener manual. The salesman couldn’t even weigh such small amounts, but he was a good sport, and I walked out satisfied to have seed in hand and only 85 cents poorer than when I went in. 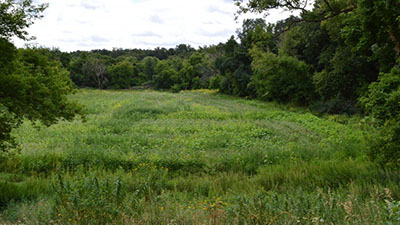 Now, instead of my little city garden plot, I have this huge Minnesota farm. There was never any question about whether I would cover crop. The only question was how to do it on an area 1,452 times larger than my Baltimore plot. When we first moved to the farm, I would look down on the two fields that had been in corn production and see lots and lots of bare soil, punctuated by corn stalks cut off nearly to the ground. It made me cringe when the rains came or we had a particularly windy day; I would imagine little particles of soil being picked up and carried to the river, my soil fertility declining and water pollution increasing in concert. I knew that I wouldn’t be able to farm the first year we were here – too much settling in to do – and we were also cash-strapped from the move. But I also knew that the first step in building a relationship with this land was to start paying attention to it, even if I wasn’t growing food on it quite yet. My first act toward building such a relationship was the cover crop.

Anyone who’s ever begun or maintained a relationship knows that relationships exact their prices, in time and money. This is no different on a farm. The cover crop seed that I purchased – versa grass and medium red clover – cost me $600, or $120/acre on five acres. I also had to hire a neighbor who actually has a tractor to sow the seeds ($300), but most farmers have their own equipment and don’t bear this additional cost. Now, admittedly, $120/acre for a cover crop is unusually high. [1] The Farm Country Co-Op where I purchased the seed told me that a more common figure is around $50/acre. [2] One difference between the seed that I bought and the seed that most area farmers buy is that mine was for perennial cover crops and theirs are usually for annuals. See, I figured that it would be cheaper in the long run to buy seed only once; the soil will stay covered until I am ready to expand the growing operation, a little at a time. Row crop farmers, on the other hand, plant a new crop every year – corn and soy most typically –and so they need their cover crops to die back each winter. This difference between perennial and annual is what largely accounts for the premium I paid.

Still, even $50/acre is a lot of money. The average farm size in Minnesota is 345 acres. [3] Not all of those will be growing row crops, and some farms will have some land in timber or pasture or some other such product, so not all of it may be appropriate for cover cropping. However, even if we low-ball it and say that 25 percent of a 345-acre farm would benefit from cover cropping, that’s still $4,300 for seed. Net farm income in 2014 is projected to be $81,200, with around 90 percent of that income coming from off-farm jobs. That means that, on average, farms are netting only around $7,490 from farming itself. Coming up with $4,300 would, obviously, present some serious economic problems for some farmers, at least in the short-term. (And even farmers would like to take a vacation every now and again.)

In the long term, though, cover cropping makes great sense. Cover crops break up compaction, provide wildlife habitat, and build soil organic matter. According to Ohio State University, each one percent of organic matter is worth $680 per acre in saved fertilizer costs. The Land Stewardship Project reports (see page 27) that one farmer, a Mr. Gabe Brown of Burleigh County, North Dakota, has been able to reduce his use of commercial fertilizer by over 90 percent and herbicides by 75 percent by cover cropping. When he does his math, he finds that every one percent of additional soil organic matter contains $751 worth of nitrogen, phosphorus, potassium, sulfur, and carbon. At five percent organic matter, a good aim to have, that’s $3,775 per acre. (I’d like to give a special thank you to the Land Stewardship Project for their article on cover crops, which saved me zillions of hours of research on this topic.)

Cover crops can also help reduce irrigation needs. A bare soil holds 1.7 inches of water versus 4.2 inches that a stand of living plants can hold.  This means that while farmers who use cover crops might not see much difference in their yields when compared to their neighbors who don’t use them during a normal year, they have a distinct advantage in the dry years. For instance, corn and soybeans planted after cover crops during the drought of 2012 had a 9.6 percent and 11.6 percent increase, respectively, when compared to fields that had no cover crops. Indeed, about 30 percent of the United States in experiencing a drought right now, and more droughts of longer duration are likely on the horizon thanks to climate change.

There are other benefits to cover cropping as well: it can reduce soil erosion by 90 percent and nutrient and pesticide run-off by half. So, why is it then that only two percent of farmland in the Mississippi River Basin (where I live) – a watershed that covers a whopping 41 percent of the continental United States – is cover cropped?

It all comes back to those short-term profits. Unless you’re a farmer who has some livestock that can graze on cover crop, returning some more immediate economic value to you, it may be hard to come up with the money. Let’s not forget that building soil and reaping these benefits takes time. Even non-farmers have trouble investing in long-term goals – even those who may have considerably higher pay-offs in the end – at the expense of more immediate needs. Just look at the state of retirement savings in this country. So, while farmers may know that cover crops are a good thing, they may not know exactly how to make use of them, in their current systems, in a way that makes good economic sense.

It would behoove the rest of us to help them out here. Some programs already exist to do just that. For example, the Minnesota NRCS is now providing financial assistance to farmers who will plant multiple species of cover crops on the same field for up to five years. And when farmers apply to be in the USDA’s Conservation Reserve Program, they’ll garner more points for using cover crops, which results in higher contract payments. Field days are held by many agencies, universities, and others that bring farmers together to learn best practices for cover cropping. These activities are all fine and necessary, but we need to go farther than this: the public good more than outweighs the cost of cover cropping, and the benefits do as much good off the farm as on. Cover crops help us protect our ability to produce food even under the most difficult of weather conditions; clean up our waterways so that we can swim and fish in them; and hold on to our fertile soil and keep it where it belongs. As far as I’m concerned, the issue of cover crops is a no-brainer: they’re low-tech, they save money in the long run, and we all stand to benefit from their use. For many, the seeds are a splurge—but a worthwhile one.

[1] I also didn’t have a huge variety of seed to select from: in 2013, winter weather killed much of the alfalfa and other grazing crops that dairy farmers around here were growing, and come spring they bought up pretty much all of the seed that one might also use for cover cropping. I was lucky to even find anything by the time I got around to it, in mid-May.
[2] Some cover crops can be planted for as little as $5/acre, but this probably isn’t the norm either.
[3] Across the United States, the average farm size ranges from a low of 71 acres in tiny Rhode Island to as much as 3,780 acres in Wyoming.

Nicolette Hahn Niman: It’s Not the Cow, It’s the How

Food Trends for 2022 Focus on Gut Health, Mushrooms, and Kelp

Online shopping surged in 2021, while an interest in sustainability dropped slightly.