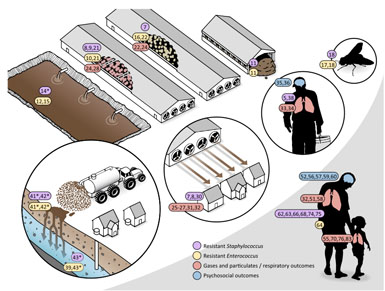 Characterized as large-scale, highly specialized, densely stocked operations, industrial food animal production operations have become increasingly common in the United States and abroad. Living near these facilities, which are sometimes called “factory farms” or “concentrated animal feeding operations,” may increase a person’s risk of certain physical and mental health problems. This conclusion comes after a review of the current literature on the topic conducted by a team of scientists, including several researchers from the Johns Hopkins Center for a Livable Future (CLF) at the Bloomberg School of Public Health.

The results are featured in the July 2015 issue of Current Environmental Health Reports.

For their review, the researchers assessed 32 studies of health effects in communities near industrial food animal production facilities. Looking across a range of outcomes, they found consistent evidence of four health problems: respiratory outcomes, methicillin-resistant Staphylococcus aureus (MRSA), Q fever, and stress/mood concerns. Specifically, living near an industrial food animal production operation was positively associated with: respiratory health outcomes, including asthma and COPD; MRSA, a contagious and antibiotic-resistant staph bacteria that causes skin, blood, and other potentially dangerous infections; Q fever, a bacterial infection that can be spread to humans by infected animals including sheep, cattle and goats; and stress/mood problems including feelings of annoyance, stress, nervousness, and anxiety as well as worse moods, characterized by tension, depression, anger, fatigue, and confusion.

These findings raise important research and policy considerations. According to author Keeve Nachman, PhD, director of the Food Production and Public Health Program at the CLF, “The evidence to date strongly suggests that people living near these operations are at increased risk of an array of adverse health outcomes. These findings also point to directions for future study including the need to assess the long-term effects of these exposures and their impacts on vulnerable groups including children and the elderly.”