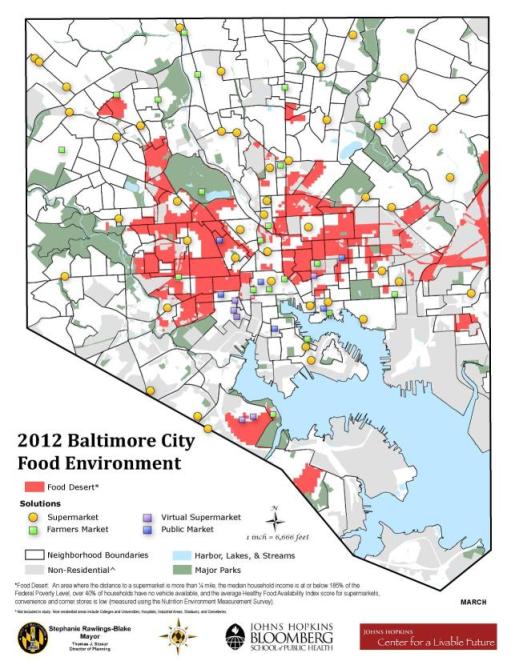 A partnership between the Johns Hopkins Center for a Livable Future and Baltimore City’s Office of Sustainability has resulted in a more comprehensive food desert definition and the release of the new 2012 Baltimore City Food Environment Map.

The new Food Environment Map was created as part of the Baltimore Food Policy Initiative to redefine “food desert” and more accurately characterize the food environment. This partnership builds upon the food desert mapping project undertaken by the Center in 2009, through the Maryland Food System Map Project; the original “food desert” map for Baltimore City was based on household income and access to supermarkets.

The new, more comprehensive definition of “food desert” is: “An area where the distance to a supermarket is more than one quarter of a mile; the median household income is at or below 185 percent of the Federal Poverty Level; over 40 percent of households have no vehicle available; and the average Healthy Food Availability Index score for supermarkets, convenience and corner stores is low (measured using the Nutrition Environment Measurement Survey).”

Using Geographic Information System (GIS) software, each of the criteria in the definition were mapped individually and then combined to create a final map. To qualify as a food desert, a city block had to meet all four criteria. The new food environment map shows those areas that met the food desert criteria with neighborhood boundaries and healthy food retail locations.

View the Food Environment Map and the Methodology Brief.

Healthy Food Retail (the circles and squares on the map)